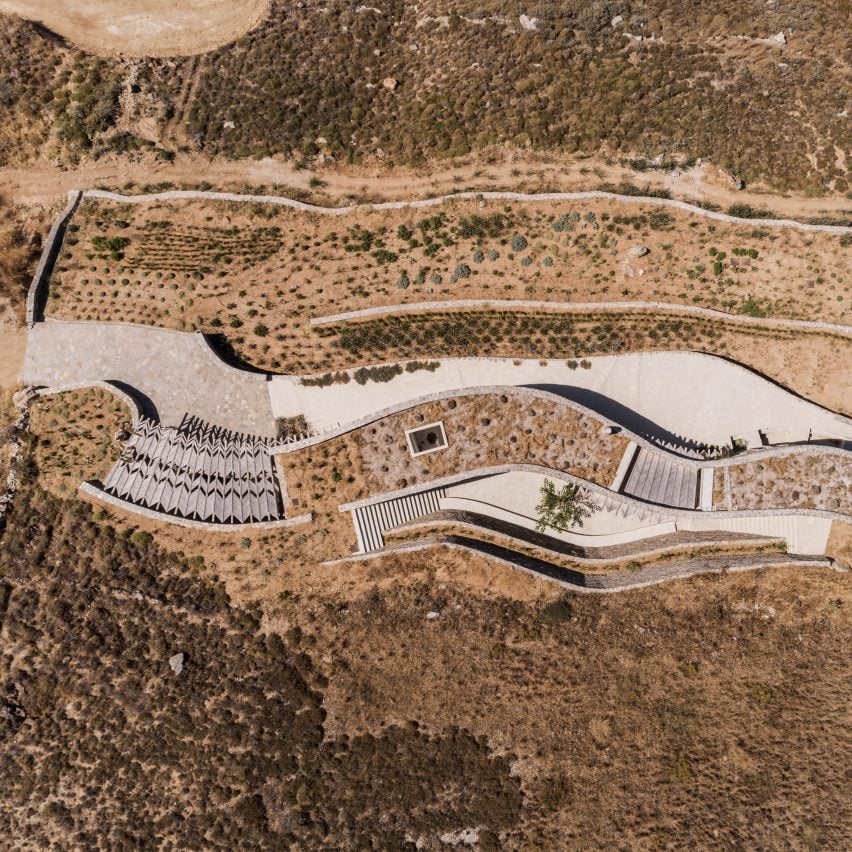 Greek studio Sinas Architects has built a house on the island of Serifos, taking cues from local dry stone walls to make the building as inconspicuous as possible.

The walls of the two-bedroom house are designed to look like the stone retaining walls that are typical of Greek landscapes. Known locally as xerolithies, these low walls were traditionally used in the cultivation of land.

George Sinas, founder of Sinas Architects, realised that this type of wall could be used to create a building that merges with the sloping topography. He called the house Xerolithi, in tribute.

“These walls are very common in the Greek Mediterranean countryside,” Sinas told Dezeen.

“In a very subtle way, they reveal the presence of man in areas that otherwise seem untouched by civilisation. It only seemed fitting to experiment with this element and to see how it could create shape and space.”

These xerolithi walls make it difficult to understand where the landscape ends and the house begins. This effect is emphasised by the roof, which is covered in gravel and native shrubs to help it fit in with its surroundings.

In fact, the house contains 245 square metres of floor space, as well as terraces that wrap all around the living spaces.

“The walls have a lightness, like ribbons in the air,” said Sinas.

“They seem to be moving gently closer, away from the slope and independently from one another, forming living spaces in between.”

The form of the building dictated a linear layout for the interior.

The volume is divided into two blocks, with the larger containing the living spaces and the primary bedroom. Two additional guest bedrooms are located in the smaller block, plus there’s also a basement.

There are two sheltered terraces that can function as outdoor dining spaces, one that slots in between the two blocks and a second located at the eastern end of the house.

While only the first is sheltered beneath the main roof, both are framed by wooden pergola structures with bamboo canopies. With their irregular arrangements of wooden beams, these pergolas boast an unusual chevron pattern that creates patterns of light and shadow.

This same materiality also features inside the house – wooden ceilings joists are exposed overhead and infilled with alternating sections of bamboo.

“The beams supporting this structure naturally could not be placed parallel to each other, instead they follow the house’s curvy morphology, like vertebrae on a long spinal cord,” said Sinas.

“As a result the bamboo was knitted in a fishbone manner, creating a unique pattern with beautiful shade textures.”

Most of the internal walls are plastered, giving a bright and airy feel to the interiors, while doors and inbuilt furniture are made from solid wood.

The bedrooms all have glazed doors that open out to a front patio with a sea view. The living room has glazing on both sides, allowing it to open onto both this space and a secluded patio at the rear, which offers more privacy and shelter from the wind.

Xerolithi is currently being used as a rental property for vacations. Sinas hopes it will set an example for a new type of Greek architecture, more in keeping with the landscape than the bright white boxes that the islands are known for.

“When one thinks of the Greek Islands and its vernacular architecture, scattered and stacked white boxes come to mind,” said Sinas, explaining his ambition to “challenge this morphological preconception”.

“The main goal for this project was to experiment with alternative forms,” he added, “different to the archetypical Cycladic architecture model, yet respecting all the basic elements that comprise its character, and taking into consideration the amazing scenery that would host this new addition.”

Also on the island of Serifos, Greek studio Mold Architects partially submerged a house with views of the sea into a rocky hillside.

Photography is by Yiorgos Kordakis, with styling by Anestis Michalis.

You may have missed

The Many Uses of Precast Barriers