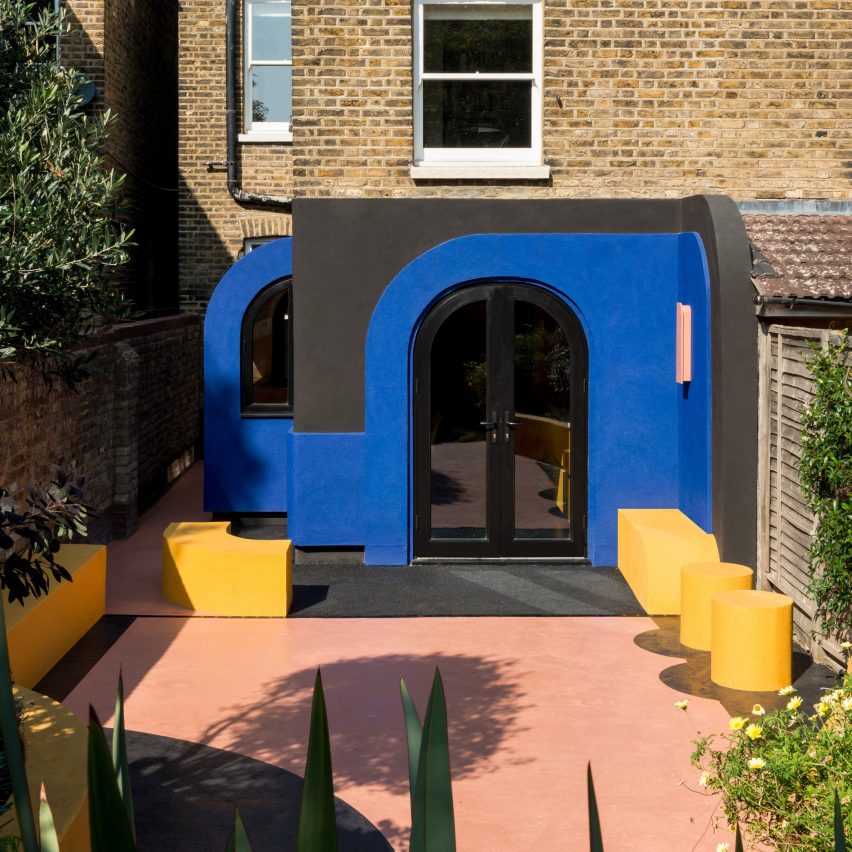 London studio Alexander Owen Architecture drew on its clients’ love of modernism and pop art to create a colourful kitchen and terrace for at Amott Road in East Dulwich.

Geometric shapes, timber curves and bold pigments characterise the project, which also involved adding a modest side extension to the end-of-terrace property in southeast London.

Owners Simon Ryder and Carolyn Norgate had lived in the property for nearly 20 years, but didn’t like spending time in the kitchen as it was dark and disconnected from the garden.

Alexander Owen Architecture redesigned the space on a tight budget and with little change to the overall footprint – earning a spot on this year’s Don’t Move, Improve! shortlist for its work.

The studio took inspiration from Ryder and Norgate’s favourite artists and designers. The couple owns pieces by pop artists Jasper Johns and Peter Blake, as well as abstract expressionist Terry Frost. They also like fashion designer Paul Smith for his playful use of colour.

The clean lines, sinuous forms and use of light, meanwhile, come from the work of Alvar Aalto, whom Ryder and Norgate have admired since a trip to Helsinki that included a visit to the modernist designer’s home and studio.

“We strive to design homes as unique as their owners, so we took our design cues from the various design inspirations the clients gave us and turned this into a piece of architecture in a bid to merge the balance between art, architecture and furniture design that the clients love,” said the studio.

To give the couple the connection to the garden they sought, the studio demolished the existing rear lean-to and inserted arched double doors that open directly onto the terrace.

It also added a small side extension with many windows, making room for a dining nook within the kitchen.

Inside, timber ceilings that curve down into walls are combined with yellow cabinetry and a turquoise splashback.

Outside, there is a feature facade and geometric seating installation made with a silicone render in bright yellow, ultramarine blue and blush pink.

Aalto gets a further nod with three of his Artek Golden Bell pendant lights installed over the kitchen table.

Alexander Owen Architecture completed the Amott Road renovation in September 2020. The studio was founded by Richard Bridges and James Webster, who first met at school and both went on to work at London studio Foster + Partners. The pair contributed their middle names to form Alexander Owen.

A previous renovation they undertook in the same neighbourhood of East Dulwich featured a marble-clad extension and garden room.

You may have missed

The Many Uses of Precast Barriers